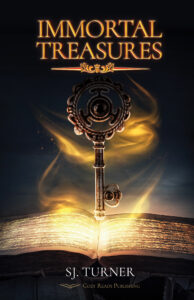 When Clara Redfearn—a retired high priestess of the Eternal Flame Coven— purchases the contents of the old Stepney Castle, she has no idea what they will find. Though given the Castle’s history, being occupied by the original Vampire Sovereign, Julien Laurent, and his family, the items should draw a curious crowd to her new antique store—Immortal Treasures.

Sorting through a box of the vampire artifacts, Olivia Parker —Clara’s granddaughter— unknowingly discovers an ancient Timekeeper Journal. While she is frightened by its magical pull, there’s a part of her that can’t seem to put it down.

As she cracks the spine on the ancient leather-bound tome and begins to read the first exquisitely written inscription —Julien Laurent ~ S.O.V.— every vampire named within its pages suddenly stops. Until today, time has been frozen within the cover while it waits patiently for its chosen interpreter— Olivia.

They’ve been waiting more than a century for her. The one witch who can unlock the secrets inside the journal and the only witch capable of activating the resurrection key.

What the vampires don’t know yet is that Olivia Parker may possess the power, but she has no idea how to use it, nor does she care to learn.

Yesterday’s Tomorrow is expected to be released during the second quarter of 2022. Be sure to check back often for updates. 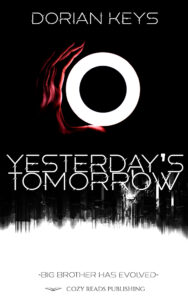 Times have changed, people have changed.
Most would argue that we’ve evolved, but what good is evolution if, in the process, we lose our humanity?

For all intents and purposes, Elton Nett is a refugee. He and his family fled their birthplace and settled in a new world with hopes of a better life. A world where they could be free to decide their own fate, or so they thought.

Simmered in a sea of lies and deception, humanity was tricked into obedience and compliance. Elton and the majority of his peers were deceived by the same evil his father had cautioned about—the System.

While some aspects proved beneficial, the System exhaustively broke them down. Physically and mentally morphing humanity into something new—something unthinkable.

They called it progression.

Thankfully, the essence of humankind can’t be measured by what encases it.

A Murder In 2079 promises Science Fiction lovers an adventure beyond their dreams.

A Murder In 2079 is expected to be released in the late fall of 2022. Be sure to check back often for updates. 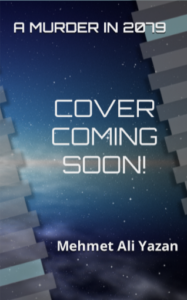 A robotic murderer.
A planet in chaos.
And the one detective who can uncover the truth behind it all.

In 2079, humanity has spread through space, and with them, they bring robots. All regulated. All overseen. All in strict compliance with UN standards and the three robotic laws of Isaac Asimov. The first law of robotics is clear: A robot may not injure a human being nor, through inaction, allow harm to come to them.

Everyone knows it’s unrealistic, but when senior detective Harry Mortimer is sent to Icarus B, it’s his job to solve the impossible.

Has an A.I. gone rogue? Could there be a human playing puppet master? Where should he begin?

Mortimer, his assistant Scott Yvensen and an increasingly bogged down police department fight to find answers, all while under assault by mysterious assassins and threats against humankind. As the mystery begins to unravel, Mortimer faces a new enemy who carries him on a chase across the stars and a strange new threat.

And this is only the beginning.

Stay in the know

Sign up for Cozy Reads Publishing Newsletter and be the first to know – New Authors, New Releases, Cover Reveals, Giveaways, and more. ↓

Cozy Reads Publishing uses cookies on our website to give you the most relevant experience by remembering your preferences and repeat visits. By clicking “Accept”, you consent to the use of ALL the cookies.
Do not sell my personal information.
Cookie SettingsAccept
Manage consent

This website uses cookies to improve your experience while you navigate through the website. Out of these, the cookies that are categorized as necessary are stored on your browser as they are essential for the working of basic functionalities of the website. We also use third-party cookies that help us analyze and understand how you use this website. These cookies will be stored in your browser only with your consent. You also have the option to opt-out of these cookies. But opting out of some of these cookies may affect your browsing experience.
Necessary Always Enabled
Necessary cookies are absolutely essential for the website to function properly. These cookies ensure basic functionalities and security features of the website, anonymously.
Functional
Functional cookies help to perform certain functionalities like sharing the content of the website on social media platforms, collect feedbacks, and other third-party features.
Performance
Performance cookies are used to understand and analyze the key performance indexes of the website which helps in delivering a better user experience for the visitors.
Analytics
Analytical cookies are used to understand how visitors interact with the website. These cookies help provide information on metrics the number of visitors, bounce rate, traffic source, etc.
Advertisement
Advertisement cookies are used to provide visitors with relevant ads and marketing campaigns. These cookies track visitors across websites and collect information to provide customized ads.
Others
Other uncategorized cookies are those that are being analyzed and have not been classified into a category as yet.
SAVE & ACCEPT
error: Content is protected !!